Dr. Greg Autry, a Clinical Professor of Space Leadership, Policy and Business at the Thunderbird School of Global Management and an Affiliate Professor with the Interplanetary Initiative at Arizona State University, has been appointed to the advisory board for the Space Force Association (SFA). Dr. Autry also serves as a Visiting Professor with the Institute for Security Science and Technology at Imperial College London.

When asked about his role with the Space Force Association Dr. Autry stated, “I’m excited to be joining the Space Force Association Advisory Council. The SFA serves a significant role in augmenting the capabilities of the United State Space Force by providing a unique perspective on critical space issues to military, business, and governmental leaders. SFA is also a vehicle for educating the public about the importance of maintaining national superiority in space power.”

Bill Woolf, founder and president of the Space Force Association commented on Dr. Autry’s appointment. “The Space Force Association is very pleased that Dr. Autry has decided to join our efforts in furthering our goal to achieve superior national space power by shaping a Space Force that provides credible deterrence in competition, dominant capability in combat and professional services for all partners. His expertise and guidance are invaluable to our organization.”

In addition to his academic credentials, Dr. Autry served on the 2016 NASA Agency Review Team and as the White House Liaison at NASA in 2017. He was nominated by the president to serve as Chief Financial Officer of NASA in 2020. Dr. Autry also served as Chair of the Safety Working Group on the Commercial Space Transportation Advisory Committee (COMSTAC) at the FAA. He is currently the Vice President for Space Development of the National Space Society. He has testified to the U.S. House of Representatives, the U.S. Senate and presented at the Canadian Parliament.

Dr. Autry started his career as a software and network engineer and has founded and managed several businesses in the technology sector. Dr. Autry holds a B.A. from California Polytechnic University at Pomona and an MBA and Ph.D. from the Merage School of Business at the University of California, Irvine. Read Dr. Autry’s complete bio on the SFA Advisory Council page. 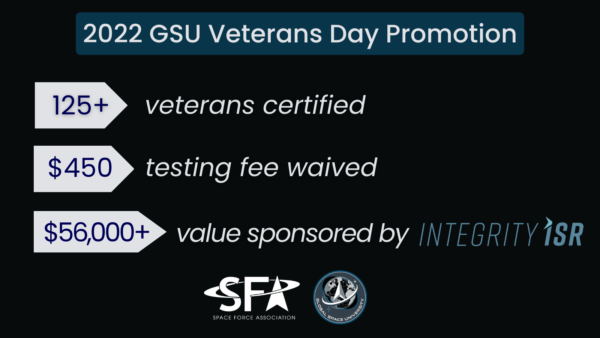 In honor of Veterans Day, the Space Force Association offered free space professional certification testing to active duty military members and veterans during the month of November under Global Space University. Global Space University announced that, thanks to the sponsorship of Integrity ISR, more than 125 veterans took advantage of the free space professional certification testing, which normally carries a $450 fee, for a total value of over $56,000. 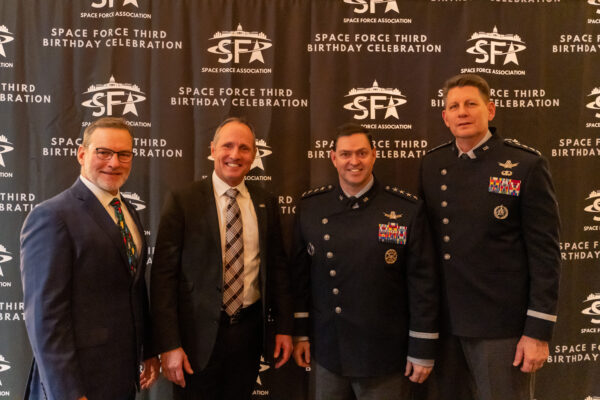 The Washington D.C. Chapter of the Space Force Association (SFA) hosted a celebration in honor of the third birthday of the United States Space Force. The event was held on December 20th at the Army Navy Club in Arlington VA. The festivities included a celebration honoring Space Force Guardians and their mission and included special guest General B. Chance Saltzman, Chief of Space Operations, United States Space Force, Bill Woolf (USAF Col. Ret.) founder and president of the Space Force Association and many other high ranking military, political, and industry leaders.